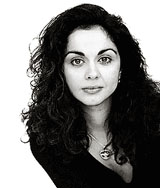 Many Iranians are aware that the country’s official media underplay the gravity of the country’s situation, and thus tune into (officially banned) satellite channels and access information on the internet. „I know what’s going on“, says Nazanin, a university student, „and I am scared. When will they attack us?„

„I believe that we have a right to nuclear energy“, says Behrooz, a high-school student. „But if the world doesn’t believe us, I don’t think it is worth getting bombed over.„

„At first I supported Ahmadinejad“, says Bardieh, another university student. „But he has destroyed our reputation in the world with all this holocaust nonsense. We are not anti-Semitic, even if we don’t like Israel’s politics. We have a tolerant culture, but now the world thinks we are Nazis. Is that why they hate us so much in America?“

Yassi, a young painter in Tehran, tries to be optimistic about the possibility of military action against Iran: „I hope it doesn’t happen. But Americans are not knowledgeable about different cultures and Iran is one of them. If there was more contact between our cultures they could see that we are just human as they are, we have families that we love like they do, we have jobs, we have our own businesses, we travel, we are well educated … like them! The youth of Iran is still suffering from the long war with Iraq and just want to make up for the years they have lost, that their families have lost. I just hope they realise that.“