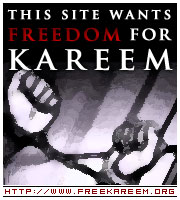 There Is No Deity but the Human Being

Is it logical for “restrictions” on “freedom” to exist? This inquiry comes to my mind whenever I find some advocates of liberalism in the Middle East contradicting themselves so they can avoid clashing with societal thoughts, and so they can attract people to their ranks without giving the slightest consideration of the absolute meaning of the principles that they call for. These principles, of course, contradict with the principles of the society and its inherited tenets.

Freedom, as I learned it, understood it, and believed in it, is the removal of all restrictions from the human being’s burden. Slavery, which is its antithesis, means the submission of the human being by imposing some restrictions on his life for the purpose of controlling him. Where restrictions are found, freedom disappears, and where freedom is found, the restrictions fall. This is obvious and does not require practical evidence, and it is illogical to object to it on the grounds that societal principles or religious beliefs must be taken into account. Either absolute freedom is our goal, or we be honest with ourselves and declare our hatred and rejection of it, and declare our preference to surrendering to restrictions over having freedom handed to us…

Freedom’s denial of restrictions does not mean that the human being has the complete freedom to do everything he is able to do. Being powerful does not mean that I am free to subjugate he who is less powerful than I am. For one of the most important principles of freedom is to not trespass on the limits of others’ freedoms; this is so that freedom will be meaningful, and not be merely a justification for the actions of those who take advantage of their power to subdue others. Freedom – coupled with responsibility – is a right for all human beings with no distinction, and in order to have this right implemented in a realistic picture, every individual must respect the freedom of others and not degrade it. The law is what organizes this matter, and prevents individuals from trespassing on each other in the name of freedom.

Which brings up an important point: The fundamental function of the law is to organize the relationships of individuals with each other within the society, and to protect their freedoms from being exploited or degraded. Do lawmakers have a right to impose on
others – on the freedoms of human beings – additional restrictions that have nothing to do with avoiding the trespassing of some individuals on the freedoms of others?!

For example: Does the law have the right to criminalize an individual’s action whose effect does not trespass the private life of his fellow man? And is it justifiable to impose on the citizen obligations, on the grounds of submission to the law, that in effect degrade his personal freedom? I think that this matter is not within the function that laws were created for, and hence, this is considered a departure of the law from the framework that was placed for it, and that is the protection of the freedoms of the individuals. And with that, it transforms from a tool of preserving individual freedoms to a new restriction on it, which has no benefit apart from subjugating the individuals for the sake of a new societal organization that sanctifies the law more than its sanctification of the individual (the deity).

Regardless of whether this law is a custom, a religious legislation, or positivistic, it cannot, under any circumstances, be placed above human beings, and it cannot be pressed on them, on their desires, or on their wills in life. Laws are nothing but deaf, rigid provisions, whereas the human being is a mass of live emotions which we have no right to press on it this deaf entity, and we have no right to submit him through its provisions.

Verily, we must return to the beginning and define the function of the law in our lives. And before that, we must convince the human being of his individual sanctity, and that nothing surpasses him in importance and standing besides himself. Following that, the law is a follower, protector, and organizer of his life. It is not a tool of suppression with which whoever is behind it aims to create a new deity the human being will prostrate to and sanctify.