Christians and Yezidis in Kurdistan Region (KR) in Iraq were stunned on Friday 2 Dec 2011, by attacks on their businesses, religious and social institutions.

The attacks began by an apparently small demonstration by young men who, incited by a Mosque Imam, soon turned violent and went on the rampage destroying and burning cosmetic and make-up shops, hotels, alcohol shops belonging to Christian and Yezidi owners downtown the city of Zakho on the Iraqi Turkish borders.

The demonstration soon swelled into a huge angry crowd that headed to the Christian Quarter in the town destroying alcohol shops and other properties belonging to Christians under the watching eyes of hundreds of angry and defiant onlookers.

Once perhaps the only safe haven for the Christian community and other ethnic minorities in Iraq in the aftermath of the last regime change, Kurdistan Region (KR) was swept away by the tides of violence against this indigenous community in Iraq.

There were similar attacks in the city of Duhok the centre of Duhok Governorate, Sumeil the site of the 1933 massacre of Christians, the Christian village of Sheuz about 10km to the north west of Duhok, and other villages in what seemed to be coordinated and well-planned attacks.

Following many years of relatively peaceful coexistence in KR, the ethnic minorities in the region are once again caught in between political bickering and a growing extremist theocratic ideology as has always been the case throughout its history in Mesopotamia.

It was shocking to see footage of films and pictures run on the local TV stations showing young men causing havoc with no one to keep them at bay.
The recent and unprecedented sudden upsurge in violence against Christians and Yezidis in (KR) has sent the shivers down the spine of the members of these communities. 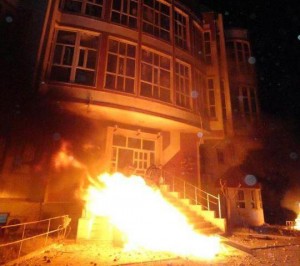 More shocking and surprising still was the ease and freedom with which the attacks were carried out – questioning the future of the values of a fledgling democracy, tolerance and coexistence in the region.

The village of Sheuz was attacked by some 400 men in private cars who destroyed and set to fire alcohol warehouses belonging to Christians in the village.
“After destroying and burning the stores, attackers loaded their cars with undamaged containers of alcohol and drove away”, said an eye-witness.

For such attacks to happen in KR raises the questions as to who is behind mobilizing and inciting such big multitudes of young men and what is really happening behind doors and how are the defenseless and peaceful ethnic communities in the region to face such situations.

The prospect of the total disappearance of this already endangered ethnic community along with other non-Muslim ethnic communities such as Yezidis and Sabaites, from the social fabric of the Iraqi society seems to be looming large.

It was not clear why it took the local authorities quite some time to bring the situation under control.

During President Barzani’s visit to the town, and in a defiant gesture, leaflets were given out to people in Zakho threatening, “ if you ever reopen, we will kill you and let your defenders come to your rescue”. Others, meanwhile, attacked other Christian villages in the village of Derabun. 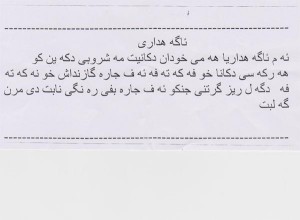 „We hereby caution all alcohol-shop owners that anyone who re-opens will have only to blame themselves, for this action will be coupled with death.“

Strict security measures were later taken to protect Christians in Kurdistan ahead of Christmas celebrations.

However, an aura of anxiety and fear haunts the minds and hearts of the non-Muslim ethnic communities living in the region.

It remains to be seen for how long can these communities survive and go on about their ordinary lives under government protection.

The Christian community political parties and organizations have been demanding an autonomous region in (KR) whose draft constitution (article 35) has provided for the creation of such an autonomous region, as well as a governorate in areas of the Plain of Nineveh where there is a majority of non-Muslim ethnic communities.

The question is if such demands will ever be realized on the ground before the last Christian leaves Iraq in the foreseeable future.