Google launched an Open Source initiative aimed at speeding up the mobile Internet. The goal of the „Accelerated Mobile Pages“ (AMP) technology is to ensure faster website loading times on smartphones. More than 30 media companies, including ZEIT ONLINE, have joined this initiative. Twitter, LinkedIn, Pinterest and WordPress are also backing the AMP project.

AMP reduces the source code on a web page to its content and a few other commands. This enables the creation of webpages that use very small amounts of data. The pages will be cached on servers from Google and other providers around the world. Users who call up a page that has been coded in AMP HTML profit from faster loading times. 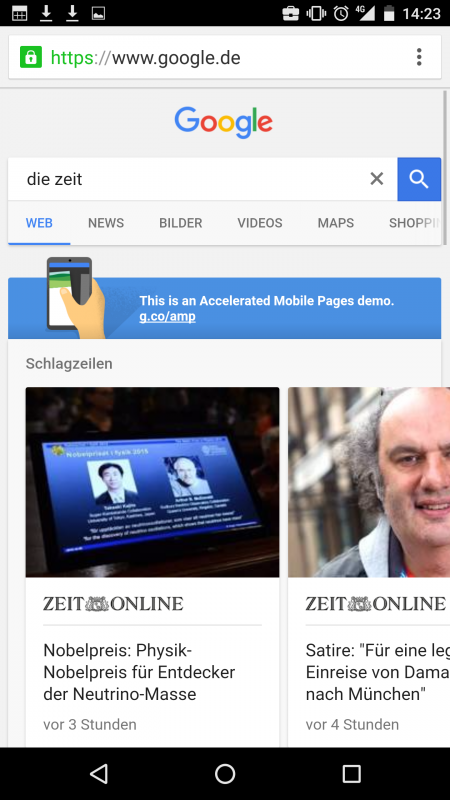 Today, the first initiative partners have posted a handful of articles created in the new format. ZEIT ONLINE is also testing AMP. You can find our first articles in AMP format by clicking on this link on your smartphone.

AMP is one of the first results of the „Digital News Initiative“, a series of discussions that have been taking place since April between European publishers and Google about concrete products catered to the media industry. In addition to DIE ZEIT, other founding members of the „Digital News Initiative“ include Frankfurter Allgemeine Zeitung (Germany), Financial Times (UK), Guardian (UK), El Pais (Spain), La Stampa (Italy), Les Echos (France) and NRC Media (Netherlands). BBC, Buzzfeed, Hearst, The New York Times, The Washington Post, The Telegraph and Vox Media have joined the AMP initiative. Given its Open Source approach, any media organization that might be interested is free to participate.

Google’s AMP initiative is a response to other products like Facebook Instant Articles and Apple News that also optimize news content for shorter loading times. With the products by Facebook and Apple, however, articles are hosted in closed areas that cannot be indexed by Google’s search engine. Google is interested in providing a technology that allows publishers to make the faster loading versions of their articles also available on the open, searchable web. Publishers, too, have an interest in enabling users to reach them on as many platforms as possible beyond their own websites.

The technical specifications for AMP are available to the public on Github.