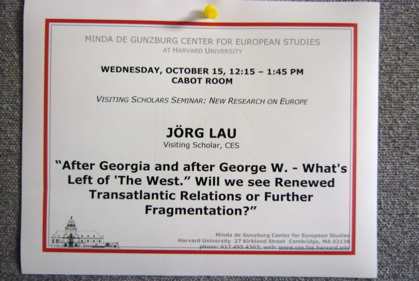 Looking back after three weeks of economic turmoil, the Georgian conflict almost looks dwarfed in relation to the worries that we are now facing.
This fact is very telling in itself: It speaks to the situation of the EU and the US that a conflict that seemed to remind of the Cold War has been overshadowed by a crisis of a completely different order. Let’s put it this way: The West’s room for action in the Georgian crisis will be determined by the outcome of the financial crisis. The „financial crisis“ is much more than this wording suggests. I will adress this later in the talk.
Anyhow, I am here at CES to try and find out which way transatlantic relations could go after these eight years. Are we going to see a more divided and more fragmented west in an increasingly multipolar world? Or are we going to see a resurgence of power block politics under a new headline – liberal democracies vis à vis autocratic regimes? A little bit later I will briefly discuss two major publications dealing with this alternative.
Where do we stand in transatlantic relations at this very moment? I would like to play time machine with you and go back more than five years to a very significant moment.
It is the eve of the Iraq war.
The American president is on his ranch in Crawford Texas, like so many times during his term. He is entertaining an important ally from Europe – the conservative Prime Minister of Spain, José Maria Aznar. Aznar is willing to change the course of Spanish foreign policy according to the wishes of the Bush White House. For the first time in modern Spanish history, the country is going to be a part of an invading alliance – side by side with the United States. It’s no small thing for the Spaniards to do this. A huge step actually, a very daring political bet for Aznar.
It would kill him politically eventually. Here is a man who was even willing to split the EU for this very gamble. You might think he was expecting a little empathy from his counterpart.
But the American president seems very much unimpressed.
By historical coincidence we have obtained the protocol of the talks in Crawford. This is a unique document.
I though it might be fun to read the most outrageous passages to you. So let me just try to transport you to Texas for some minutes: Aznar keeps begging Bush to help him with the public at home. The Spanish are not fond of the war plan. Bush keeps talking about his fantastic schemes.
„We can win without destruction“, he says.
He already has plans to transform Iraq into a federation. „Meanwhile“, he says, „we’re doing all we can to attend to the political needs of our friends and allies.“
PMA (Aznar): We need your help with our public opinion.

PB: We’ll do everything we can. On Wednesday I’ll talk about the situation in the Middle East, and propose a new peace framework that you know, and about the weapons of mass destruction, the benefits of a free society, and I’ll place the history of Iraq in a wider context. Maybe that’s of help to you.

PMA: What we are doing is a very profound change for Spain and the Spaniards. We’re changing the politics that the country has followed over the last two hundred years.
PB: I am just as much guided by a historic sense of responsibility as you are. When some years from now History judges us, I don’t want people to ask themselves why Bush, or Aznar, or Blair didn’t face their responsibilities. In the end, what people want is to enjoy freedom. …

PMA: The only thing that worries me about you is your optimism.

PB: I am an optimist, because I believe that I’m right. I’m at peace with myself. It’s up to us to face a serious threat to peace. It annoys me to no end to contemplate the insensitivity of the Europeans toward the suffering Saddam Hussein inflicts on the Iraqis. Perhaps because he’s dark, far away, and a Muslim, many Europeans think that everything is fine with him… The more the Europeans attack me, the stronger I am in the United States.“

This was 5 and a half years ago, in the run-up to the war that is still going on.
The transcript of Bush’s meeting with Aznar would make a terrific theatre play: on the one side the increasingly impatient young Emperor, longing for action, yearning to send his troops into battle – on the other side the experienced old diplomat, a bit cynical from all the things he saw in his life, trying to gain time by pointing to the needs of the allies.

„The only thing that worries me about you is your optimism“ – Aznar’s skeptical remark is a sentence that sticks with you.

Bushs response would make a great headline for his chapter in the history books:
„I am an optimist, because I believe that I’m right. I’m at peace with myself.“

And then, there is the core sentence about US-European relations in the Bush era: „The more the Europeans attack me, the stronger I am in the United States.“

Does this logic still work? I don’t think so. This is over, too.
But still: The McCain-Camp tried to make use of this logic during their summer troubles.
Senator McCain was falling behind in the polls – and he had problems getting media coverage during Barack Obama’s world tour.

When Barack Obama spoke to an enormous and enthusiastic crowd of 200.000 in Berlin, Senator McCain’s staff came out with a tv ad claiming the turnout in Berlin was due to Obama’s celebrity status: A european celebrity, that is.
The more the Europeans like Obama – such was the logic of this ad – the better for John McCain. Did it work? Only for a little while. There was a short spike in McCains polling numbers after the ad was published.
But all this was swept away when the second train – the financial crisis – came around the bend.
Let’s look for a moment at these two events – Aznar in Crawford – Obama in Berlin – because they show how things have changed dramatically in the last several years.
These two moments are like metaphors for two very different paradigms of transatlantic relations. On the one hand there is the leader of the western world summoning an ally to his reclusive Ranch, pushing him around like a subservient client – the whole scene somewhat reminding of the Godfather, Part I.
On the other hand you have a candidate who includes the Europeans in his campaign – obviously ignoring the received wisdom that this might hurt him (which it actually did for a short time).
And by the way, what Obama said in Berlin was quite remarkable. I quote:
„The fall of the Berlin Wall brought new hope. But that very closeness has given rise to new dangers – dangers that cannot be contained within the borders of a country or by the distance of an ocean. (Like Terrorism, financial crises, viruses ect.)
(…) None of us can deny these threats, or escape responsibility in meeting them. Yet, in the absence of Soviet tanks and a terrible wall, it has become easy to forget this truth. And if we’re honest with each other, we know that sometimes, on both sides of the Atlantic, we have drifted apart, and forgotten our shared destiny.
In Europe, the view that America is part of what has gone wrong in our world, rather than a force to help make it right, has become all too common. In America, there are voices that deride and deny the importance of Europe’s role in our security and our future. Both views miss the truth …
Yes, there have been differences between America and Europe. No doubt, there will be differences in the future. But the burdens of global citizenship continue to bind us together. A change of leadership in Washington will not lift this burden. In this new century, Americans and Europeans alike will be required to do more – not less. Partnership and cooperation among nations is not a choice; it is the one way, the only way, to protect our common security and advance our common humanity.“